skip to main | skip to sidebar

In a suburb near Fremantle, Western australia in 2002 we located a large Khat tree (Catha edulis), a stimulant commonly used in East Africa, The Arab Gulf states and Madagascar. Its is a Medium sized tree most often found as a highly pruned shrub that is grown for its fresh shoots which contain the stimulants Cathinone and Cathine.

These trees were and may still be somewhat common in the older suburbs of Perth, Western Australia. Our investigations through local nurseries suggest that its was propagated by nurserymen over a number of decades beginning in the late 1950's as an ornamental plant. It suits the soils and climate well and it is indeed and attractive garden plant resembling in many horticultural features the Photinia.

I First became aware of this tree in 1996 when we saw a tiny specimen in a colleagues nursery. There was a sense of hush-hush about it and a story that it contained a chemical like "Speed" (Amphetamine).
We were then surprised to find a large tree in a friends grandmothers backyard in and old Perth suburb, so i sent a pressed sample to my colleague who confirmed its identity, with equal surprise. I was to find several more trees during my time in Perth, and hear of a great deal more.
It was in 2002 while cycling to Fremantle that i spotted two east African looking gentlemen high up a tree. This being the tree pictured in Figures 1 -3, from which i had already been collecting seed the week before. I approached them to say hello and hopefully learn more about its use.
At first they were hesitant, but when it became clear i was familiar with this tree they opened up. These fellows were from Kenya and were harvesting for themselves and their Ethiopian friends. They chew it socially with friends, listen to music and drink some beers. This seemed a more informal ritual than the Qat houses of Somalia and Yemen, where the Islamic customs exclude Alcohol.
These fellows told me of how they used to grow it in the moist fertile highlands, renting land between Coffee plantations in order to grow Khat. By digging a hole and planting cuttings they would establish trees that could be first harvested some 3 or 4 years later, not unlike the timespan to grow coffee itself.
When queried on seeds, they told me unequivcally that Khat does not grow from seed, as they stood against a backdrop of a seed laden tree. I understood this though as it is a common understanding with many crops that they are not grown from seed if a cutting will bear more quickly and reliably, this is the undertanding ofthe farmer, not the biologist like me, who is most interested in aspects other than yield.
This tree, they told me, was poorly managed - too big! The leaves were tough and weak, a good tree would be pollarded, that is cut off much lower and encouraged to reprout vigorously. It is these juicy crisp and low tannin shoots that are most valued.
I never saw those men again, though i spoke to the owner a few years later and the tree had been savagely pruned. The owner was dismayed at the Car loads of Africans who would turn up in the front yard any time of day or night climing the tree and taking away branches. He was concerned about litigation ifthey hurt themselves and was intending to remove the tree. Sadly this story is common, many trees i have known, and many people have told me their stories of their Africans in the trees, despair and eventual arboricide.
Those seeds however were distributed Australia wide and Worldwide.

I had the opportunity to taste some quality shoots in Perth from a recently coppiced tree. The flavour and texture was indeed far better, slight tannins and sweetness like sucking on a teabag. And a pleasant aromatic flavour. The effects were subtle but definite. Those expecting Amphetamine should be ready to be disappointed! firstly one has to chew some 150 - 300g of fresh shoots, a hefty amount to the unaccustomed!
The tannins are still present and so pucker the mouth.
The effect i can liken to Strong cup of Tea, and in exactly the same way it relaxes and invigorates. Chemically it may be amphetamine but its effects are so mild that only chemists need care. It enlivens conversation without inebriating, it is pleasing, but the cost, that of chewing so much herbage im sure will restrict its use to ethnic circles.

The compound itself is unstable, and extremely difficult to extract and stabilize. Even dried leaves only contain the weaker Cathine, perhaps useful in weight loss or congested sinus. As a starting point for drug synthesis the plant is a dead end.
Cathinone is not the same as Methcathinone, a street drug manufactured from Sinus pills and much stronger and more stable. Nicknamed "Cat" or "Kitty" this im sure has led to confusion among law makers and they have now banned the plant in two Australian states. So this plant becomes an unfortunate casualty of the War on Drugs, which is silly, because it is really the same as banning Coffee, Chocolate and Tea plants in what it achieves, while all the street drugs are made from Pharamceuticals.

In 2003 We travelled to Bali, Indonesia, to explore the Island for a month. Part of this exploration took us to the Bali Kebun Raya (Botanical gardens) at Candi kuning near Bedugul in the Mountains.
We took with us on our trip seeds of the Khat tree and donated them to the Botanic gardens.

I returned and relocated to New South Wales where i continued a long running interest in Khat. On the east coast the plants were much more rare, but multiple forms existed.
There were even some collectors beginning to cross pollinate specimens and create horticultural hybrids.One such hybrid is the Cultivar Vienna white, a hybrid of the Red and Green forms of Khat (figure 4), This was bred by a collector know as "Planthelper" living near bangalow, west of Byron Bay on the Northern New South Wales coast.
Nearby close to Lismore, NSW are Narrow leaved forms of the same species that look very different (fig 5 & Fig 6). These appear to originate more in the Southern range of the species and can be found in South Africa where they are also used (van Wyk & Gericke 2003).
Other species have also been grown and may contain similar compounds to Catha, such as the widespread genus Maytenus.
In 2009/2010 Hybrid seed of the Red and Narrow leaf Catha edulis became available.
When we returned to Bali in December 2009 we were pleased to find fellow plant collectors there had Khat trees amongst their collections.When queried about its origin we found it was sourced from the Kebun Raya and so we returned to the gardens after 7 years and easily located the thriving tree in the Medicinal herb gardens. 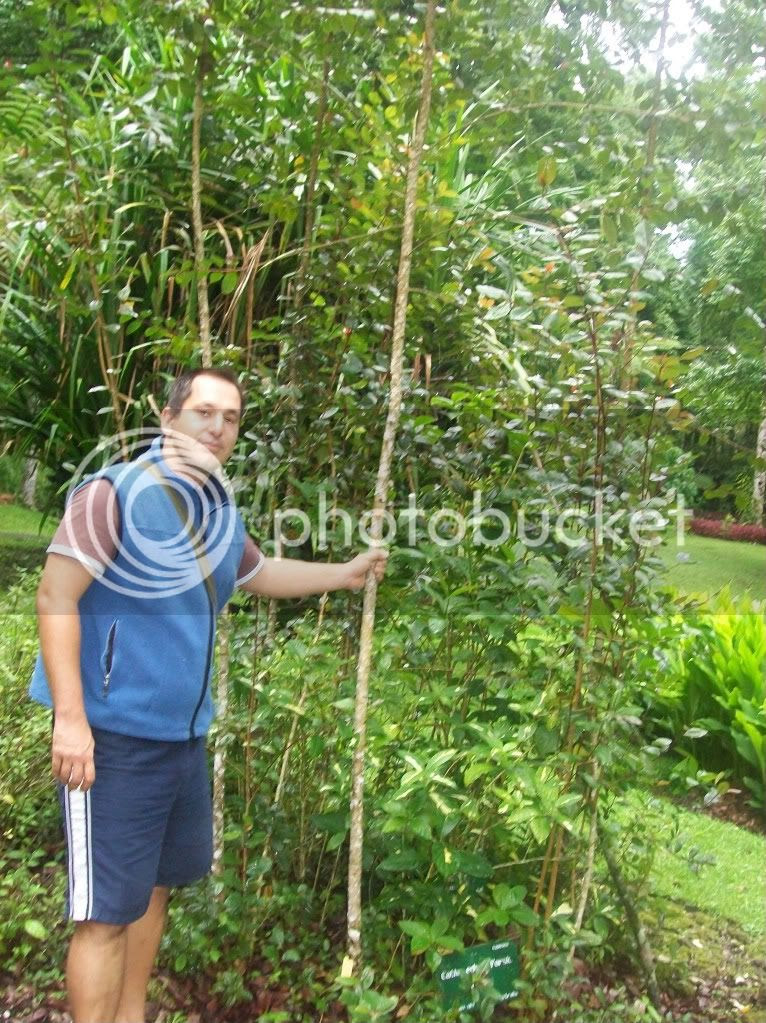 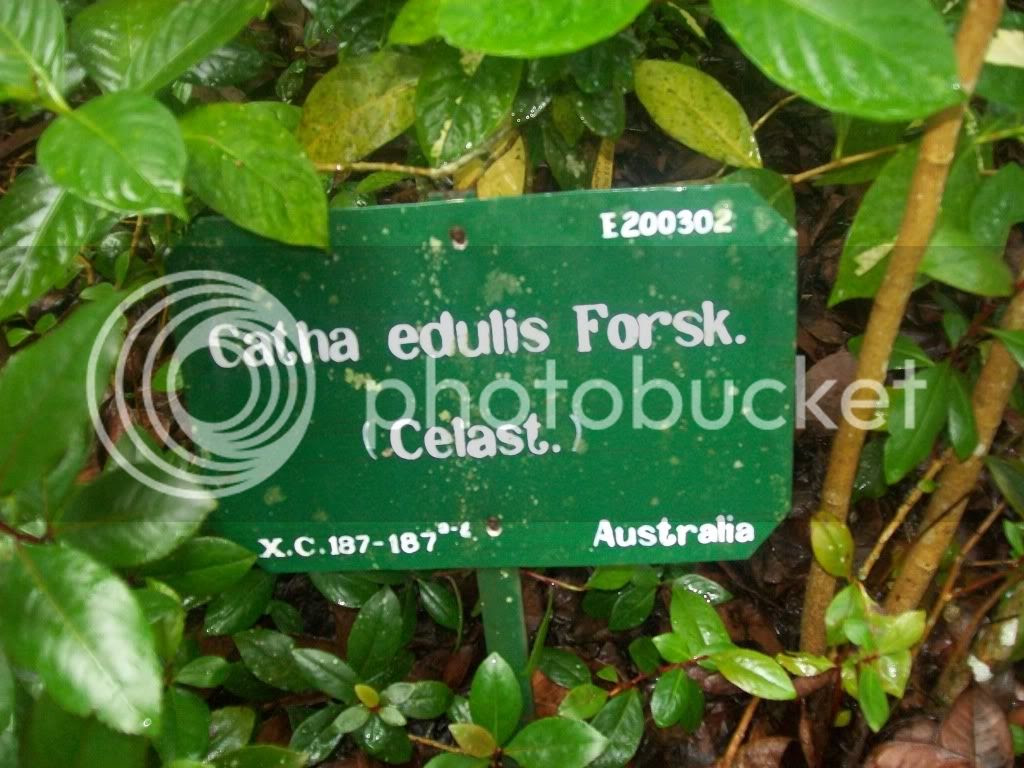 This has confrmed to us the value of Amateur plant collectors giving back to Public gardens, not just in your own country but when travelling abroad.
It is our intention to continue to donate seeds and plants of useful species to public gardens worldwide and assist in their dissemination and study

Rushby K. 1999. Eating the Flowers of Paradise: One Man's Journey Through Ethiopia and Yemen

Posted by Tropicalfoodforest at 11:35 AM